Sarah Smith
The Union
The Union Army: The union army was the force on the land fighting for the United States. During the war almost two and a half million men served in the Union Army, almost everyone was a volunteer. About 360.000 soldiers died and 280.000 soldiers wounded and 200.000 deserted in the war. The highest ranking people were General Ulysses S. Grant led the Union Army during the later years of the civil war and General George Mcclellan that led the Army of the Potomac during the early years of the civil war, and a couple of others were Robert Anderson who was known for surrendering fort Sumter, Nathaniel Banks who lost almost all his battles, General William Tecumseh Sherman who is known for taking Atlanta from the confederacy. 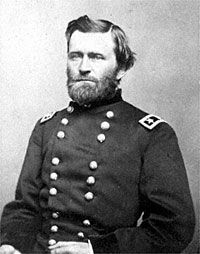 Ulysses S.Grant was the 18th president of the united states in 1869-1877 and fought for the union army as n general of the army or a five star general, which is the second highest rank in the army but the President outranks him. Ulysses s.Grant was born on April 27, 1822 –and died July 23, 1885. When he was President Grant led the Republicans in their effort to remove the vestiges of Confederate nationalism and slavery, protect African American citizenship, and support economic prosperity. Grant graduated in 1843 from the United States Military Academy at West Point, then served in the Mexican–American War and initially retired in 1854. When the Civil War began in 1861, he rejoined the U.S. Army in 1862. Grants death was July 23, 1885 when he died of cancer at the age of 63, Grant's Tomb or known as General Grant National Memorial is the final resting place for him and his wife Julia Dent Grant.